Mobile Malware on the Rise 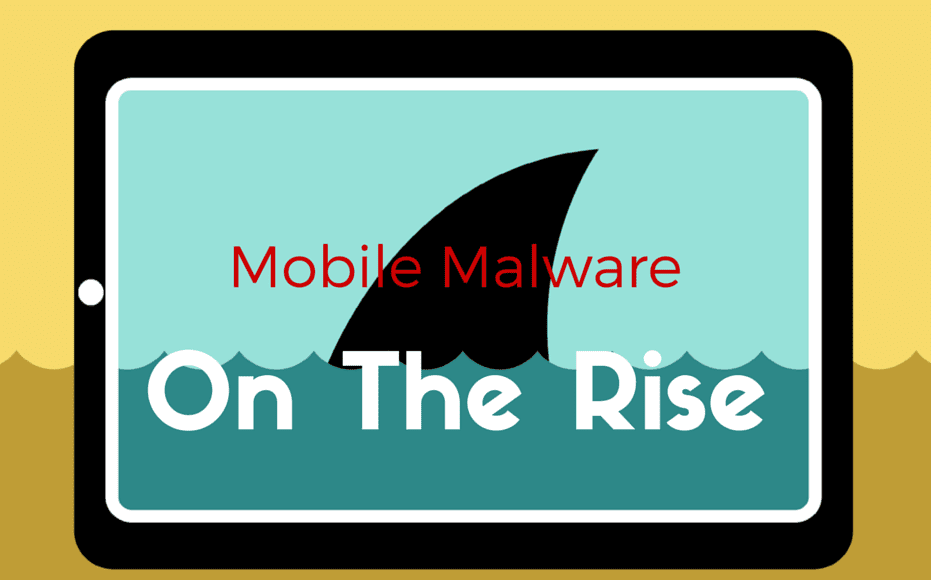 Some people might be surprised to find that even their mobile devices aren’t safe from malware. Malicious software is no longer confined to desktop computers and the rate of infection for mobile devices is on the rise. As mobile browsing becomes more common and users are able to do more from their smartphones and tablets, hackers have found a new tool with which to wreak havoc: mobile malware.

Kaspersky Lab, a cybersecurity company, reported that their mobile products alone detected a total of 103,072 new malicious programs in the Q1 2015.
Three times the amount they found in Q4 2014.
With cyberterrorists finding newer ways to abuse and exploit the browsing behavior of mobile users it’s important for executives and consumers alike to understand what mobile malware might look like and how they can better protect themselves from it.

Mobile malware relies on a lot of the same tactics you’d encounter on the desktop such as clicking suspicious links in emails, but there are plenty of unique tactics used by cybercriminals trying to exploit mobile users.
Voicemails and text messages have also been employed by would-be hackers to gain access to confidential information. Malware could come in the form of fake apps, too, and once downloaded may hold a user’s mobile device hostage, scan it for data, or force it to dial premium-rate phone numbers that result in expensive charges on your mobile bill.
No matter the form it takes, mobile malware could lead to a loss of money, your privacy, pictures and contacts, or the device itself.

How to combat cyber-attacks on your mobile device

Many of the best practices for maintaining a secure mobile device can be borrowed from desktop safety.

Since apps have become one of the primary vehicles for mobile malware there are certain precautions you can take when downloading them.

To further protect your mobile devices, make sure you regularly monitor your mobile statements for any suspicious charges that might appear.

Complacency and a false-sense of safety

One of the biggest challenges to overcome when facing mobile malware comes from the public itself. Many people think their smartphones and tablets are immune to attack or secured against intrusion, but the reality is anything but. Cybercriminals are doing their best to monetize mobile malware, specifically targeting the bank accounts of mobile users. Hackers see a great deal of potential in the mobile arena and don’t seem to be giving up.
It’s not only consumers who think they’re safe. Corporations that allow mobile access to internal resources or financial institutions that service customers through mobile apps aren’t adapting their current security strategies to include mobile breaches.

Protection against mobile malware has to start at the beginning, with the execs and designers. When reality sets in and they start to understand that mobile apps are just as vulnerable to hackers as PC applications are, they can integrate security features and encryptions to protect their content—and their customers’ data. Next up are the companies who use mobile devices to provide additional services, or as channels for allowing employees to access internal information.
Whatever the world can do as a collective to prevent mobile malware from becoming the next big thing in cyberterrorism, it starts with a better understanding of the problem, and practicing safer—and smarter—browsing habits.
If you still need help, feel free to contact us to secure your network.