True Tales from IT Support 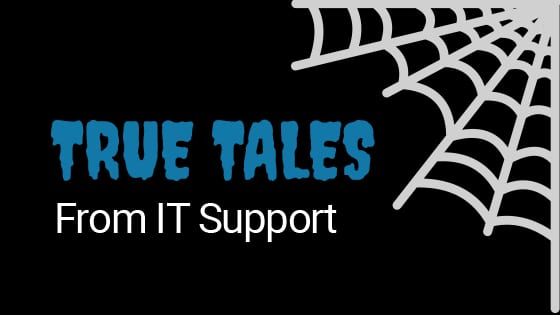 The world of IT can seem like a scary place. After all, computers often do weird, unexplainable things! Not to mention the hackers, spammers, and scammers who troll the internet looking for their next target. But through it all, it’s nice to know the good guys have our backs, when things go bump in the night (or during the day).In the spirit of Halloween, we’re highlighting the mysterious, often silly, and truly creepy tales told by the unsung heroes of tech support, (some from our own staff), who stand ready to banish the ghosts, ghouls, and supernatural hijinks of computers and networks everywhere.

My Computer Won’t Turn On

One of our clients decided to take on the task of hooking up their own computer system. After connecting all the cables and pressing the power button, the computer failed to respond. The client called us to troubleshoot the system.
While they had meticulously hooked up every cable to the system and even plugged everything into the battery backup, they overlooked one minor detail. The plug for the battery backup system wasn’t plugged into the wall. It was actually plugged into itself, so no power was being fed to any of the components. With all of those plugs to manage, it’s easy to see how this happened.

Years ago, our Marketing Manager, Kelli Hoffman, worked for a small non-profit. Since she was the youngest member of the team and knew a little something about computers, she became their de-facto “IT person” when weird computer issues would surface.
One day her boss called her into the office. As Kelli tells the story,
“She had immense stacks of papers, binders, and notebooks covering every inch of her desk. She was hunched over her keyboard, staring at her computer in a manner that clearly said she was frazzled and at her wit’s end. As I entered, she looked up and said, plaintively, ‘I don’t know what’s happening! My cursor keeps disappearing!’
I watched as she clicked on the address bar of her browser and tried to type in a website. Sure enough, the blinking cursor showed for a moment, and then seemed to disappear. I watched her repeat the process a second time and noticed, that after a moment, the cursor seemed to be stuck on the far right side of the address bar. That’s when I looked down at her keyboard. I said ‘You might want to take that book off of your space bar.’ We both had a good laugh after that.”

This story comes straight from the article Funny Help Desk Tickets, Part 2, published on Spiceworks:
“I had a guy complaining that his computer had been hacked because whenever he booted the computer, opened a program, closed a program, whatever, the entire theme song to Reading Rainbow would play. The computer hadn’t been hacked, he had just left it unattended and someone came by and set every single Windows sound to play the whole song. I changed the theme and was done. Lesson learned: never leave a computer unattended because there are tricksters out there!”

This “colorful” story was reported in a Tales from Tech Support forum on Reddit:
“I work Help Desk at the main office of a statewide corporation. Most of our calls are from employees in the same building, and we have different teams for different requests.
One day, a voicemail ticket came into our system. Fairly straightforward – ‘Printer number X on the Y floor is out of red toner.’
Anything related to printer supplies is handled by a guy on another team, so I send the ticket to him and add to the ticket ‘Printer X needs magenta toner’, assuming that by ‘red’, he meant ‘magenta’, since surely he couldn’t be referring to black, yellow, or cyan… could he?
Well, a little while later, the printer guy comes into our department and tells us that it was not magenta that was out, but cyan. The employee who noticed it reported it to the guy who called us, but thought the word ‘cyan’ was pronounced with a hard C sound (‘kye-ann’), so the caller misheard it as ‘cayenne’ and assumed that was a name for ‘red’ toner because cayenne pepper is red.
Maybe next time, just call it ‘blue’?”

Speaking English, But Not Talking the Same Language

While most silly mistakes seem to center around computer users, it’s important to note that tech support personnel make their share of goofs, too. Take this example from a Reddit forum where the tech and the user just weren’t on the same page.
“The Denver-based company I worked for had recently expanded into Ireland, and I was on the phone helping a new Irish employee log in to the system. I had set up a simple, temporary password, and I was dictating it to her over the phone. Let’s say it was ‘Password#’.
Despite repeated attempts, she was unable to log in. I dictated the password for the tenth time over the phone: ‘Capital P, lowercase a, s, s, w, o, r, d, pound sign. As in, SHIFT-3.’
‘You mean SHIFT-4.’ she said.
And then it hit me.
She’s an Irish national using a UK keyboard. That keyboard has the £ symbol on it, and anyone in the British Isles would (rightly) call that the ‘pound’ symbol.
I face-palmed at my own error and clarified that I meant the ‘#’ symbol. ‘Ohh ye mean the hashmark!’ she said, in her delightful and thick Irish accent.
‘Yes,’ I sighed, ‘the hashmark.’”

While we shared this story in a recent blog article, we thought it was worth repeating here to remind our readers how easy it can be for hackers to manipulate us to gain access to our personal information.
The really scary part of the phishing email below, is that the x-ed out password was, in fact, a real password that the intended victim had actually used in the past, which had been stolen from a hacked website.

One of our clients had their email hacked without their knowledge. The hacker was able to intercept an email that contained ACH information for one of their customers.
For reference, ACH is an electronic funds-transfer system that enables payments to another party through direct access to a customer’s checking or savings account. ACH payments are often used for payroll, direct deposit, tax refunds, and payments between companies.
The hacker was able to change the client’s ACH information, and then resend the new information to one of the client’s customers. Since the hacker had access to the client’s email address, the email looked completely legitimate to the client’s customer. As a result, the customer ended up sending $50,000 to the hacker, thinking it was going to their vendor/our client.
The moral of the story here is to always avoid sending sensitive information via email. It’s also important to scrutinize requests for large sums of money carefully before taking action. You should always verify bank transfers or payments with a vendor by phone before completing the transaction.
We hope you enjoyed our round-up of tech support tales and gained some valuable tips for handling your own hairy situations, now and in the future. But remember, whether you think your IT issues seem silly or scary, the techs at EZComputer Solutions are always here to help!