7 Spam Email Examples That Will Make You LOL 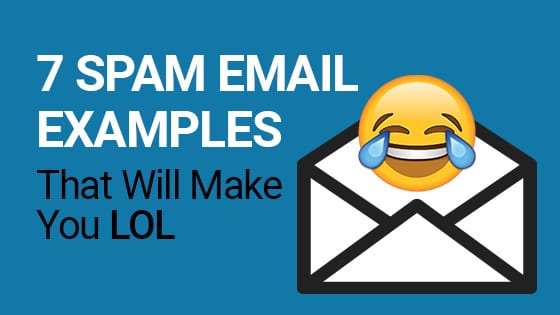 We get an enormous amount of spam email every day. Most of the time, we just think of spam as annoying, or perhaps dangerous. But, have you ever noticed that it can be funny, too?
Obviously, we don’t want to downplay the threats that spam email can pose. Yet, sometimes you just have to laugh at the bad wording, regrettable misspellings, and sheer weirdness that appears in our email inboxes every day thanks to spam.
And that’s what we’re doing today!
Sit back and have a good laugh at these hilarious spam emails we’ve received or just found online while researching for our posts here on the blog. We think these examples represent much of the spam universe – many promise free money (of course), some are downright confusing, but there are also those that are almost poetic in their creative use of the English language. Enjoy!

This is definitely one for the “confusing” file. The sender is “Unsubscribe,” and they need us to reply to stop receiving these emails? But who is Unsubscribe, and what emails are they referring to?

“Confirm” wants us to unsubscribe, too

This is the same game, but a little more sophisticated, apparently. Whoever “Confirm” is, they want us to believe that we sent them a previous message (notice the “Re:” in the subject line) to unsubscribe…from something. And now they need us to click a phishy-looking link to unsubscribe from the mysterious mailing list. Nice try, Confirm.

“Reply” wants to be deleted

We’re not sure what this one is even attempting to get us to do since there aren’t any actual words in the message. Just click the “Empty Junk” button? Done. (After taking a screenshot to laugh at, that is.)

The founder of Facebook wants to give us secret money

Don’t you think he would reach out with the good news via Facebook Messenger instead of email? And it’s a little surprising that he uses Gmail…

The United Nations wants to give us money, too

Or, do they? The faithful Mrs. Ann Walter does not seem to be a native English speaker. It’s a little tough to wade through the content of this message.
(Quick aside: this is a great example of a “Nigerian” email scam, if you’re not familiar. The name can be misleading about where these spam messages actually originate, but they’re almost always funny.)

We were enticed by the question in this subject line. Who isn’t curious about a possible “great deal” expressed in garbled English? Amusingly, the unintentional poem contained in the message almost makes us want to click. (Don’t worry, we resisted.)
What is this machine that’s producing $600 a day? What did Matthew Noble previously do for his employment that he did not hate but resigned anyway? So many unanswered questions…

What happens when you reply to spam?

If you’ve ever felt compelled to reply to spam messages, you’re not alone. (Clearly, we almost couldn’t resist replying to the “poet” in our example above.) There are plenty of tech experts, self-proclaimed “scam busters,” and reporters who do so in order to help stop criminals or get a good story. But there are also people who do it for a laugh.
Have you heard of comedian James Veitch? His TED talk from 2015 gives the hilarious account of his exchange with a classic Nigerian spammer who wanted to ship him large amounts of gold.

Not all spam is so obviously spam…

As you can see in our visual examples, junk mail filters caught all of this spam based on clues in the messages.
Email filtering gets “smarter” and more sophisticated all the time, and it can catch many of the classic indicators that help us to spot and avoid phishing emails ourselves. This is good news, of course, because we can just click the “Empty Junk” button in our email app and never even give most spam a second thought today.
But, not all spam is so obviously spam. Some emails take the form of hoaxes that seem so real that we feel the need to forward them to others, and before we know it, they’ve taken on a life of their own.
For example, have you ever heard of the “killer bananas” hoax that sprung to life all the way back in 2000? Rumors were started that imported bananas contained flesh-eating bacteria that was spreading rapidly across the nation. The hoax had people so up in arms that various news services, including Knight Ridder and the LA Times, launched investigations.
And today, email scams often make their way onto social media and get shared millions of times, which can result in legitimate media outlets getting tricked into reporting that “fake news” we’ve all grown so fond of.
In fact, if you often utilize Snopes.com to check where something online may have come from and whether it might be true, you’ll quickly learn that many very old and long-dead email hoaxes have been resurrected thanks to social media sharing, especially on Facebook.

Be careful out there!

As we discussed in a recent blog post, email scams are becoming ever more sophisticated, and we all need to be vigilant to recognize, and not become victims of, phishing attacks.
That said, don’t let the scammers prevent you from using email or social media! Have a good laugh at their expense, and send their attempts straight to your spam folder.
And if you ever have any questions, or if you accidentally clicked a questionable link, give our expert IT consultants a call. We’re here to keep you and your business protected with affordable and no-nonsense support.